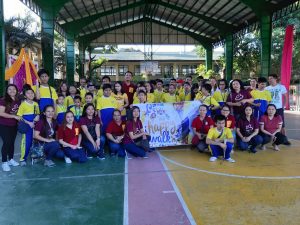 Participants of Happy Walk before proceeding to Luneta Park.

On February 18, 2019, around 7:35 in the morning, all the 41 elementary students, 12 teachers and 15 parents/guardians gathered for the final instructions and orientations at the school covered court for the activity entitled Happy Walk: Orientation and Mobility for Visual Impaired Students towards Safe Movement in Home, School and Community” which was sponsored by The Philippine School in Italy.

The objective of this event was to provide the students of the Philippine National School for the Blind the learning opportunity which can broaden their awareness of the environment, resulting in increased motivation, safety, and independence.

At exactly 8 o’clock in the morning, participants left the school premises for the first itinerary, riding public transportation via a Multicab going to the LRT Edsa Station.  After 5-10 minutes, the students safely arrived at the train station. 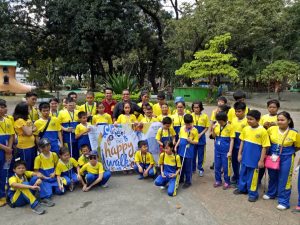 Students posed for a picture together with Happy Walk sponsor, Mr. Harmel Tatel III of Philippine School in Italy.

The teachers assisted the students in using the elevator and in purchasing the train tickets. The students were given accommodation in priority lanes and were given the benefits of 20% discounts on their transportation fares. Many students experienced to buy LRT ticket and experienced to ride the train for the first time.

While waiting for the train to arrive, the students were given seats at the special boarding area. Then they were assisted by the teachers, parents and security guard in getting in safely inside the train within the designated area for the senior citizens and persons with disabilities.

Some senior citizens offered their seats to the visually impaired students, other passengers had some conversations with the students while traveling going to UN station.

After 6 stations, the Happy Walk participants arrived safely at the UN Station. Immediately, everybody walked excitedly going to the Luneta Park. The totally blind participants were guided by the teachers, parents and their sighted classmates to walked together safely going to the pedestrian lane.

Many of the student participants set foot in Luneta Park the first time. They enjoyed exploring different attractions in the park.

The first site students visited was the relief map of the Philippines. They were given the opportunity to visualize the entire Philippine Archipelago. After the tour in the relief map, the participants proceeded to the Rizal Children’s Playground. Here, all the students, even the parents, and the teachers enjoyed the swings and slides. Some climbed and played at the Jurassic creatures cast in cement.

The snacks were served around 10 o’clock in the morning. And while the participants were enjoying eating under the shade of tall trees in the playground, the event sponsor Mr. Harmel Tatel of the Philippine School in Italy arrived to meet the students, parents, and teachers of the Philippine National School for the Blind. As much as he wanted to spend more time interacting with the participants Mr. Tatel has only limited time due to his busy schedules. The students led by music teacher Ms. Garrol offered their heartfelt gratitude to Mr. Tatel by singing the Thank You Song.

As they continued the tour, the participants enjoyed many historical landmarks. While touring the park, the teachers were giving lessons about the historical landmarks such as different buildings around the Luneta Park namely the National Museum, the Gallery of Heroes, the stunning sculptures from renowned Filipino artists, the forty-foot tall statue of Lapu-Lapu, the monument of our national hero, Dr. Jose Rizal and many important heritages of our country. All these provided the chance for the students to internalize the sacrifices, and the legacy they left for the country and to the Filipinos.

The participants not only enjoyed the different historical heritage, they likewise enjoyed the nature; the shade of tall trees, the dancing fountains, the landscaping particularly the Japanese garden located inside the Luneta Park. The teachers stressed out to students that as a Filipino they should preserve and protect the Luneta Park for the next generation.

With this activity, the students of the Philippine National School for the Blind had applied the concepts and skills they have learned inside the school particularly in transportation skills; such as using the elevator, riding different modes of public transportation such as Multicab, Light Rail Transit (LRT) and Jeepney. In addition, the students developed tactual discrimination and fine motor development by exploring the environment. They also enjoyed the privileges and benefits given to persons with disabilities. Lastly, this learning opportunity broadened their awareness of their rights, the community and the environment resulting in increased motivation, safety and independence.