PNSB celebrates its 49th Year as the only institution mandated to promote the education of the blind in the Philippines.

The 49th Foundation Day of PNSB marked the kick-off celebration of its semicentennial anniversary next year. This year’s celebration is a snapshot of what will be in store for the next year’s foundation day dubbed by Mrs. Corazon B. Salvador, Head of the Special School at her opening message.

The entire morning was packed with festival of talents coming from various genres of music and dance performances from traditional dance to classic, to modern-day Hip-Hop music. 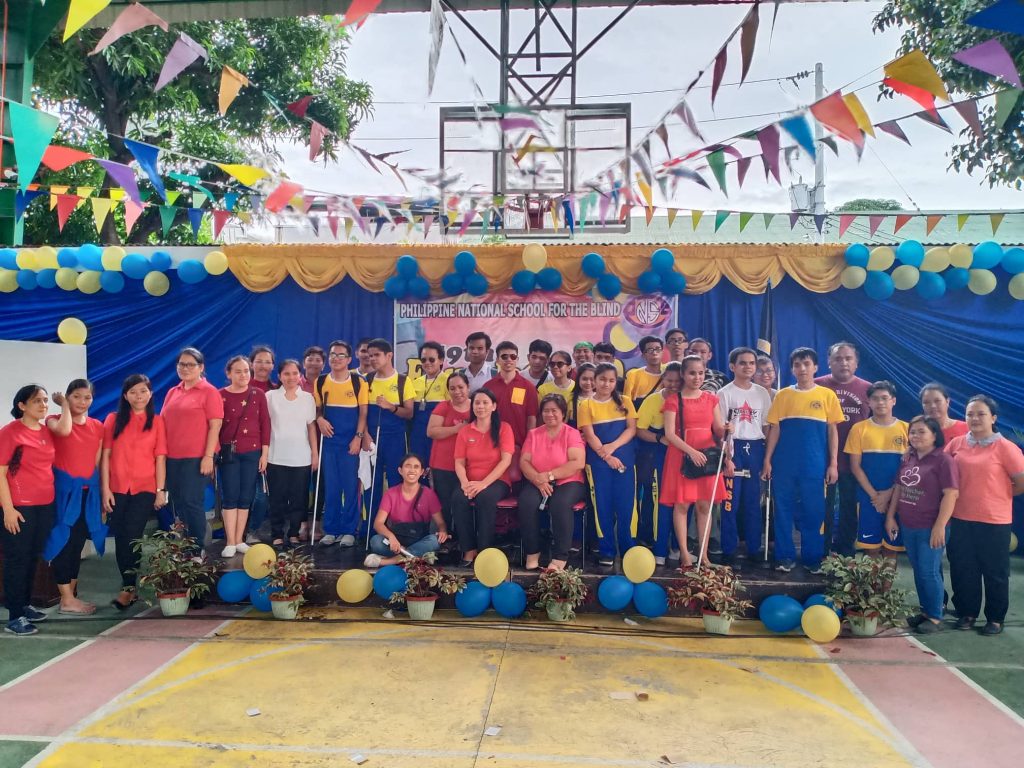 The Ati-Atihan Dance was the highlight and the most anticipated performance of all; since it is one of the 50th Founding year gala highlights.  Meanwhile, the PNSB Jammers’ original Hip-Hop rap composition made the young crowd go crazy. While, the classic dance from the 70s along with the breath-taking reunion of Rolling in the Deep of Adele by Mrs. Amelita Dela Rosa, GPTA President, made the young at hearts reminisced the old days.

In the meantime, sports fest for adults and fun games for the children draw everyone in the spirit of camaraderie as school teaching, as well as, non-teaching personnel, the parents, and the alumni were grouped equally to play in the different sporting events.

Additional surprises were the showing of the video of the school’s achievement and excellence over the past years. This speaks of this year’s Foundation Day’s theme, “PNSB Celebrating 49 Years of Progress Towards Excellence and Global Competitiveness”; as it hallmarks the school’s progress and achievements, in a nutshell, backed up by testimonies from one of the school’s  3-decade Special Education Teacher, Ms. Annielou Mendoza. Ms. Mendoza recounted her experiences then and now at PNSB. She said, “from the time I came here ‘til now, PNSB learners have not really changed; they were achievers then and they continue to excel even more today”. “Hindi nahuhuli ang mga bata natin sa kahit na anong larangan ng pagkatuto”, she concluded.   On the other hand, Mr. Ronald Manguiat, a 10-year-long student, and is now a teacher of this institution iterated the numerous milestones of the school that he had not enjoyed during his time as a student like the luxury of having 5 embossers and computer laboratories, among others.

Furthermore, Dr. Rosalie R. Condes, PSDS of Cluster 5, who has served PNSB for 19-long-years as a teacher, OIC, Principal, and PSDS, led the crowd to the historical establishment of PNSB as an independent institution solely catering for visually impaired learner by virtue of Republic Act 3562.

She capped that On July 10, 1970, Philippine National School for Blind is no longer a component of the so-called Philippine School for the Deaf and Blind founded by Dr. Delight Rice in 1901. Dr. Condes further added that as combined institution, PNSB is now on its centennial celebration.

The day was concluded with the awarding of certificate of appreciation to some of the school’s bona fide stakeholders in education such as Wok2Go, JCI Perlas International, ANGCOP, Couples for Christ, Pasay City Chapter.