In line with the government’s efforts to create more disaster resilient communities, the National Disaster Risk Reduction and Management Council (NDRRMC) announced that it would be conducting its 1st Quarter Nationwide Simultaneous Earthquake Drill (NSED 2018) on February 15, 2018. The campaign aimed to educate Filipinos about how they should prepare for earthquakes and other hazards brought about by disasters.

According to the Metro Manila Earthquake Impact Reduction Study (MMEIRS), the movement of the West Valley Fault that is expected to happen within our lifetime is estimated to cause a 7.2 magnitude quake in Metro Manila and neighboring cities and towns.

On February 15, 2019, at exactly 2:00 P.M. a total of 153 individuals participated in the national simultaneous earthquake drill held at the Philippine National School for the Blind disaster evacuation ground. Everyone who was present at the school ground at the time of the drill concurred in the evacuation procedures. Including parents, guardians, visitors, and the entire PNSB workforce. 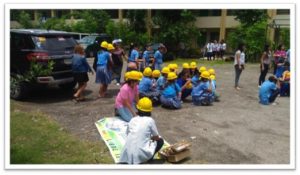 To intensify the drill, the school’s Batang Emergency Response Team or BERT together with their advisers portrayed a series of well-staged disaster response and management scenes that are expected to happen when an earthquake strikes.

After the drill, an evaluation was done by the School DRRM Coordinator.  Several suggestions were proposed by the students, teachers and DRRM committee to further boost everybody’s performance during an emergency evacuation procedure.

The drill aimed at ensuring that a safe and orderly evacuation will be executed when an earthquake occurs to prevent or reduce disaster-related casualties like injuries and lost lives.

Once again, SDRRM has successfully engaged every single one in a serious commitment to be vigilant and be on guard when an earthquake shakes the PNSB ground.